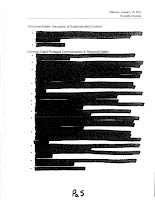 An interesting appeal awaits an Appellate Division decision.  The case challenges a Gloucester County judge’s ruling that a school district, in response to an Open Public Records Act (OPRA) request, could redact 100% of the substantive portions of the minutes of a nonpublic (closed or executive) meeting held some fourteen months earlier.

The case is Dean Smith v. Swedesboro-Woolwich School District, et al, Appellate Docket No. A-000840-15 and links are provided for Smith’s Brief and Appendix, the school board’s Brief and Appendix and Smith’s letter in lieu of a reply brief.  The minutes at issue apparently contain board members’ discussion regarding renewal of the superintendent’s contract.

Appellant Smith’s attorney, Donald M. Doherty, Jr. of West Berlin, argued that suppressing 100% of the private discussion was contrary to a 1991 New Jersey Supreme Court case that interpreted an exception to the Open Public Meetings Act’s that allows public bodies to discuss personnel matters in private.  That Court held that the exception was “‘designed to enable the public body to determine the appropriate action . . . [and] not to withhold from the public either the public body’s determination’ or the rationale for such determination.”  Doherty said that his client can discern nothing from the heavily redacted minutes that disclose what action the Board took or why the action was taken.

Doherty argued that even though the school board provided some justifications for the redactions, including exemptions for personnel records, attorney client privilege and the advisory consultative and deliberative privilege, the justifications were not specific to each line that was blacked out.  He wrote that given the above cited Supreme Court case, the school board was burdened with showing that there was some “particularized need to continue withholding the details of the minutes some 14 months after the meeting occurred.”  Doherty argued that “blanket statements” of privilege “do not allow the public to know or discern with any reasonable clarity what was discussed in the nonpublic meetings or what actions were taken.”

The hearing in the trial court was conducted by Gloucester County Assignment Judge Georgia M. Curio who on September 8, 2015 dismissed Smith’s case after having heard argument on August 27, 2015.  Curio, who had the benefit of reviewing the unredacted version of the minutes, said that she sympathized with Smith because he “is flying blind” but ruled that she was “satisfied that each and every line is subject to one or the other, and sometimes more than one appropriate exemptions.”