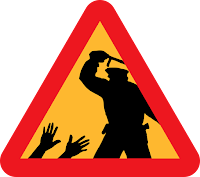 On October 16, 2015, the Borough of Lawnside (Camden County) agreed to pay $120,000 to a woman who claimed that a Lawnside police officer slammed her several times against her car.

In her suit, Tiffany Gilmore claimed that on September 29, 2010 she was driving home from the grocery store with her two children when Lawnside Police Officer Carmen Colon jumped in front of her car and screamed for her to pull over. She said that since she was in a “known drug area” and didn’t recognize Colon as a police officer and ordered her daughter to call 911 while she drove to the Lawnside police station.  Colon had followed her to the police station and, according to the complaint, grabbed Gilmore after she exited her car and “slammed her five times into her vehicle and then handcuffed her.”  When Gilmore complained about how tightly the Colon had applied the handcuffs, Colon allegedly grabbed the cuffs and pulled on them to direct Gilmore into the police station.

Colon issued Gilmore six traffic tickets and charged her with a disorderly persons offense and resisting arrest.  Gilmore claimed that all the charges were dismissed or terminated in her favor.

In her complaint, Gilmore noted that Colon had been fired from the Camden Police Department but that Lawnside hired her anyway.  Attached to the complaint was a May 22, 2007 letter from Camden Police Lieutenant John A. Sosinavage to the Camden County Prosecutor’s Office in which he wanted to make clear that Camden did not give Colon a good or even neutral job reference and wanted to “limit any future liability against the City of Camden based on Lawnside’s negligent hiring and retention of Colon.”

Colon’s conduct was the basis of a $740,000 settlement in early 2015.  According to a newspaper article that covered the settlement, Colon “resigned from Lawnside’s police department in 2013 in exchange for dismissal of charges alleging she filed a false report and tampered with public records.” Colon herself received a $150,000 settlement from Lawnside as part of her agreement to resign.

The case is captioned Gilmore v. Borough of Lawnside et al, Federal Case No. 1:12-cv-05917 and Gilmore’s attorney was Thomas Bruno of Philadelphia.  The case documents are on-line here.

None of Gilmore’s allegations have been proven or disproven in court. The settlement agreement resolution expressly states that the $120,000 payment does not constitute an admission of wrongdoing by Lawnside or any of its officials. All that is known for sure is that Lawnside or its insurer, for whatever reason, decided that it would rather pay Gilmore $120,000 than take the matter to trial. Perhaps the defendants’ decision to settle was done to save further legal expense and the costs of trying what were in fact exaggerated or meritless claims. Or, perhaps the claims were true and the defendants wanted to avoid being embarrassed at trial. This is the problem when cases settle before trial–it is impossible to know the truth of what really happened.