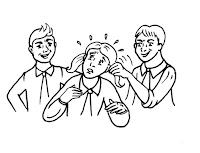 Update:  It looks as if there were two $50,000 settlements for a total of $100,000.  Also, I obtained a more narrowly redacted version of the civil lawsuit.  Everything is on-line here.

On November 2, 2015, Camden County Superior Court Judge Louis R. Meloni approved a $50,000 settlement for a two former student in the Mount Ephraim (Camden County) school district who claimed that school officials were “willfully indifferent” to harassment and physical assaults that they suffered at the hands of fellow students.

The students are identified in court documents only by their initials which, along with other information, was redacted from the versions of those records supplied by the school district.  In sum, both students claim to have been the targets of harassment and bullying by other students and that school officials, while on notice of the harassment, took insufficient steps to prevent it.

Of the $50,000, nearly half of it went to the students’ lawyer, Kevin M. Costello of Mount Laurel. The civil complaint and judgment that embodied the settlement are on-line here.

None of the students’ allegations have been proven or disproven in court. All that is known for sure is that Mount Ephraim or its insurer, for whatever reason, decided that it would rather pay the students $50,000 than take the matter to trial. Perhaps the defendants’ decision was done to save further legal expense and the costs of trying what were in fact exaggerated or meritless claims. Or, perhaps the claims were true and the defendants wanted to avoid being embarrassed at trial. This is the problem when cases resolve before trial–it is impossible to know the truth of what really happened.